Harnessing the Green Swan in an increasingly challenging world

A copy of an ancient Apple ad graces the walls of our Somerset House office, now stilled and silent in lockdown. Against a black background, the poster features an energetic shock of white hair, framing the mischievous face of Mark Twain, and reruns one of his provocative dictums: “Whenever you find yourself on the side of the majority, it is time to pause and reflect.” A lifelong mantra of mine. 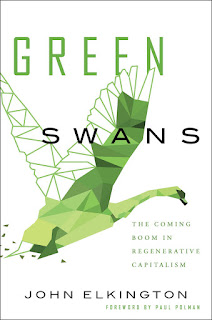 But a very different Twain-ism was rattling around my brain as we walked around the ancient temples of Delphi a few weeks ago, with Covid-19 literally snapping at our heels, with each successive hotel closing its doors immediately after we left.
So that second Twain aphorism? You may have heard various versions of this second quotation, but it runs along the following lines: "History doesn't repeat itself, but it often rhymes." I confess that over the years I have sometimes souped it up by rendering that last bit as “... but by God it rhymes!”
As Cov-19 disrupted and then ultimately truncated our trip, I was left both a little breathless and intrigued to know whether the ancient wars between Athens and Sparta might hold clues for today’s superpower rivalries? Having looked into the history a bit, it was very clear that there are now a number of rhyming patterns at work.
So, for example, when the plague hit ancient Greece in the midst of the bitterly fought Peloponnesian War it wounded more open, more urban Athens much more severely than it did the more dispersed and yet disciplined Sparta, with the result that the latter leapfrogged over the former to become the dominant regional power.
Might we now see similar dynamics as Covid-19 disrupts today’s power blocs, with the closed outcompeting the open?
These were the sort of questions, alongside more humdrum concerns, that people brought to such oracles as Delphi back in their heyday. As it happens, I first turned up in front of the gates of Delphi more or less exactly 50 years ago, with five companions exploring the world, only to find them closed for refurbishment. Looking back, though, I’m not sure I fully grasped the historical importance of the site, which for hundreds of years was considered the “centre of the world”.
The Oracle, voiced by the Pythia priestesses, was famously gnomic when it came to its prognostication. Among the most well known of the millions of words of wisdom offered over the centuries came when the fabulously wealthy Croesus, king of Lydia, asked whether he should join the Greeks to fight the Persians?
He was famously advised that if he attacked the Persians a great empire would be destroyed. Little imagining that the empire in question might be his own, he trundled off to war. And the rest, as they say, is history.
More recently, forecasters struggling to cope with uncertainty, and perhaps aiming to cover their bets, have used tools like scenarios. Either this or that, or maybe something else entirely. One way or another, the chances are that at least some elements of such forecasts will be borne out by events. But scenarios can be constrained by emergent realities, for example by systemic crises like the climate emergency.
As I have tried to get a better grip on at least some aspects of the future since announcing the “product recall” for my 25-year-old triple bottom line concept, two big birds have powerfully influenced my thinking. Not through the subtle art of divination, delving into their entrails, but by symbolising two very different dynamics in our increasingly exponential world.
Most notably, I have been inspired by the work of Lebanese-American author, risk analyst, and former options trader Nassim Nicholas Taleb. In his 2007 book The Black Swan, Taleb provides a series of timely lessons about the “impact of the highly improbable”, as his subtitle put it. His timing was impeccable, spooky even, as the global economy descended that same year into a financial meltdown few had seen coming.
Early on in his book, Taleb noted that he was sticking his neck out, in claiming that “against many of our habits of thought . . . our world is dominated by the extreme, the unknown, and the very improbable (improbable according to our current knowledge) – and all the while we spend our time engaged in small talk, focusing on the known, and the repeated.”
The second bird competing for my attention, this time a creature of my own conjuring, has been the Green Swan. My new book, Green Swans: The Coming Boom in Regenerative Capitalism, riffs off Taleb’s black swan metaphor. He has long argued that black swans are unpredicted, and generally unpredictable.
So he now insists that Covid-19 is not a black swan, as many have tried to label it. Just such a pandemic has been repeatedly predicted, he recalls, but the powers-that-be decided to ignore those warnings. Still, this latest coronavirus outbreak shares with true Black Swans the characteristic that in its wake reality will have been transformed; our world shifted on its axis.
In Green Swans, I explore ways forward for capitalism, democracy and sustainability, here riffing off the language of the Chinese communist party. Just as the world’s most populous nation vaunts “socialism with Chinese characteristics”, I have been investigating aspects of capitalism, democracy and sustainability with either “black” or “green” swan characteristics, often a combination of both.
A green swan is a profound market shift, generally catalysed by some combination of wicked problems and, among other things, shifting paradigms, values, mind-sets, politics, policies, technologies and business models. Along the way, a green swan delivers exponential progress in the form of economic, social and environmental wealth creation.
At worst, it achieves this outcome in two dimensions while holding the third steady. There may be a period of adjustment where one or more dimensions underperform, but the aim is an integrated breakthrough in all three dimensions. 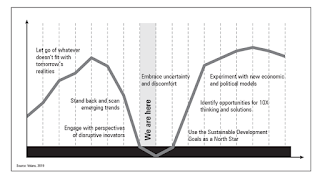 My assumption in writing the book was that the world has been heading into some sort of historic U-bend, as illustrated in the diagram, which I have been using for several years now. This is well beyond a single, normal recession; instead I believe that we are seeing a period where the established macroeconomic and political order goes down the tubes, and new ones surface. As we head deeper into the bottom of the U-bend, we enter the period of maximum confusion, uncertainty, fear and anger.
Rather than being mysterious about the future, let me now try to nail this jelly to the wall. First, the primacy of shareholder value, which aims to keep social and environmental impacts (negative or positive) at arm’s length, will be increasingly contested around the world.
And as governments are forced to bail out businesses and sectors, there will be growing pressure to provide quid-pro-quo outcomes. Radical decarbonisation, anyone? Ultimately, if we are to truly transform capitalism, then a key task must be to transform capitalism’s master discipline of economics.
But if economists are to be genuinely helpful in spotting and reining in Black Swan trajectories and blazing Green Swan pathways, they must work out how to embrace the “too difficult” worlds of environmental and social impact, and linked forms of valuation.
The further we dig into the relationships between capitalism and democracy, the more sustainability looks like the natural bridge between the two, focusing as it does on intergenerational equity and balanced, inclusive and environmentally sustainable value creation, and distribution over extended timescales. Today’s global challenges are so far beyond our collective experience that they demand a radically different kind of engagement from senior leadership teams in the private sector. And, over time, a radically different kind of leader.
Meanwhile, in a new project commissioned by the World Business Council on Sustainable Development (WBCSD) as part of its refresh of its Vision 2050 roadmap launched in 2010, Volans has been exploring the implications and likely impact of Covid-19. Among our early conclusions:
Covid-19 has temporarily weakened what Milton Friedman called “the tyranny of the status quo”, creating a context in which radical, systemic change is suddenly possible.
More specifically, Covid-19 has the potential to be a catalyst for a Green Swan transformation of the global economy: a profound shift in the rules, norms and institutions that govern markets, which could unlock a wave of exponential changes with positive consequences for people and planet.
Many companies were spectacularly poorly prepared to deal with a crisis like this. They went into the crisis carrying huge amounts of debt and with complex supply chains so tightly optimised for efficiency that there was no slack in the system to enable them to adapt. This lack of preparedness is not an unfortunate accident: it is an entirely predictable result of companies' relentless focus on efficiency and short-term shareholder value maximisation.
As predicted in Green Swans, we are seeing an accelerated expansion of the sustainability agenda; from responsibility to resilience and regeneration. The value of building resilience is self-evident in the wake of Covid-19. Regeneration matters because it is only by regenerating our economies and communities, and the wider biosphere, that we will be able to achieve true resilience.
Hopefully, whether we choose to hear it or not, the message is now rather clearer than it was for “poor” Croesus. Indeed, you don’t need to be a Delphic priestess to know that we now have a once-in-a-working-lifetime opportunity to change the economic system so that it delivers the future we want, the future sketched in the UN Global Goals. It’s time, as we put it at our Tomorrow’s Capitalism Forum in January, for us all to either step up – or get out of the way.
at 15:49