"Whites will cling to power far into the future, because it is so entrenched in the system"

Charles Clifton, a member of the executive committee of the NAACP Johnstown District 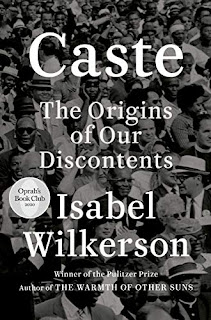 One of the best of many excellent new books about race in America is Isabel Wilkerson’s “Caste: The Origins of Our Discontents.”

Her main thesis is that racism in America is part of a larger system of caste, with whites on the top and Blacks on the bottom, similar to India’s castes with the Brahmin caste on top and Dalits, or Untouchables, on the bottom.

When Dr. Martin Luther King Jr. visited India, he was welcomed by Dalits as a fellow Untouchable, a member of America’s lowest caste. He was at first surprised and then saw the justness of this. Even after the civil rights laws of the 1960s, the injustices and inequalities of caste persist.

Wilkerson’s style is highly metaphorical, comparative and historical. She is a fine storyteller, as well as, a thinker. For her, caste is like being locked in a box with little opportunity for escape, or being manipulated as in the film “The Matrix,” or having to play a certain role in an endless play.

Because caste reduces opportunity and therefore disables talent from flourishing, everyone suffers the loss. It spreads its poison, suck as anthrax, freed from its permafrost by climate change to kill reindeer and their herdsmen, one of Wilkerson’s metaphors to indicate the endurance of caste.

In the 183Os, a French visitor to America, Alex de Tocqueville, toured the antebellum South and found that “the surface of American society is covered with a layer of democratic paint.” The disparity between our democratic ideals and evident racism has only hardened and persisted.

Wilkerson found that in India, a Dalit may not contradict or even approach a Brahmin without absolute deference. She found similar expectations of caste in America, often in her own experience, as when a waiter provided intentionally poor service, or when a person of color is assumed because of her color to be one of the kitchen help at a conference instead of the main speaker. Her discussion of swimming pools is enlightening and alarming.

Even into the 1960s, Blacks were excluded from pools, and if a Black person jumped into one, it had to be emptied, cleaned and re-filled before whites could use it. Can you imagine?

Wilkerson makes the point that the racism of caste makes white people act and vote against their own interests.

Poor whites especially need to be above someone, and caste answers this need.

They will go against their own advantage to preserve the caste’s power, even if they have to fill the pool with concrete so that no one can swim. and they will be quick to scapegoat others, especially Blacks and nonwhite immigrants.

Hitler and his generals were great admirers of the American treatment of Blacks, and they are Wilkerson’s third instance of caste. The Nazis wondered why America had not used its very effective methods of controlling Blacks on the Jewish population.

Both slaveowners and Nazis used cruelty and dehumanization as means of control.

The Nazis especially admired American eugenicists, and their eagerness to promote the white “race.” Hitler praised America for this in “Mein Kampf.”

Albert Einstein barely escaped from Hitler’s Germany, and he immediately perceived the unjust treatment of Blacks in America. He often spoke out against it. “He hates race prejudice” said W.E. B. Du Bois, ”because as a Jew he knows what it is.”

At the end of her book, Wilkerson speculates that whites will cling to power far into the future, because it is so entrenched because of the system of caste. She says what is needed is “super-empathy”.